Powered by Vacations To Go, with over 8 million happy customers since 1984

Cruises that visit or depart from Dubrovnik sail in the Mediterranean.

Perched on the Dalmatian Coast, this Pearl of the Adriatic is a medieval Mediterranean city known for its Baroque, Gothic and Renaissance architecture. Many tours visit the Old Town, a UNESCO World Heritage Site, and venture up to the ramparts of the city’s iconic walls (with portions dating back to the 13th century) for panoramas of its splendid churches, palaces, monasteries and fountains. Dine and shop along Old Town’s Stradun, or main street, before a tour of the Franciscan Monastery Museum and the Old Pharmacy, which has been operating since 1317. A filming locale for HBO’s hit series “Game of Thrones,” Dubrovnik offers plenty of guided tours for those wanting to see the settings of popular scenes shot in the show’s fictional town of King’s Landing. Other excursions include cable car rides for bird’s-eye views and sea-kayaking adventures to the isle of Lokrum and a hidden beach cave. 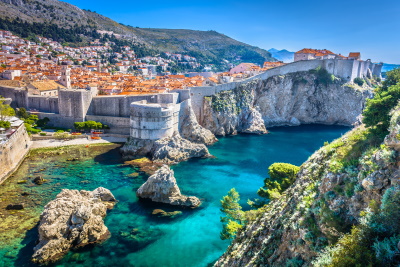 Gruz Port is located approximately a half hour from the Dubrovnik Airport.

Continue to D8 by turning left twice from the airport, then right onto D8. Drive on D8 for 18km, then take the exit towards Dubrovnik Center. Continue onto Ul. Pera Bakica/Ul. Vladimira Nazora/Vukovarska ul. Vukovarska ul. turns right and becomes Obala Stjepana Radica, which is your destination.

Call us at 800-338-4962 or inquire about a vacation here.
Open Mon-Fri 8am to 8pm, Sat 9am to 5pm, Sun 9am to 6pm, U.S. Central Time
Our office will reopen in 6 hours and 47 minutes.
Other Vacations
All Oceangoing Cruises
Escorted Tours
River Cruises
Hotels & Resorts
Africa Safaris